SofType 5 is an on-screen keyboard that has been designed specifically for use with English and other languages.

SofType is a software utility which replaces the functionality of a desktop keyboard with a full featured, on-screen keyboard. SofType can be accessed using a mouse or mouse emulator. SofType works by generating an image of a keyboard on the computer screen. When a key is selected (clicked), the character represented by that key is sent to the Windows application with focus.

Slide-out Launcher is a new feature in SofType to start or re-start the SofType keyboard using dwell. Simply position the mouse pointer at the selected screen edge and a slide-out button appears, hold the mouse pointer within the button for the 5-second countdown and SofType starts or re-starts.

Slide-out Launcher provides peace of mind knowing you can start SofType without assistance.

No more worries about logging in or accessing those special Windows security screens and dialog boxes when installing a new application.

SofType has a built-in dwell clicking feature called AutoClick for automatically generating mouse button clicks. When AutoClick is enabled, mouse button clicks are performed by holding the pointer motionless for a programmable length of time – the AutoClick Delay or dwell time. The specific mouse button action taken is controlled using the Dragger toolbar.

AutoClick allows you to click anywhere – the keyboard, the Desktop, in applications, the Windows 8 or 10 Metro interface, at Login, in Ctrl+Alt+Del secure screens, and even in UAC security prompts!

Dragger™ is a toolbar integrated into SofType; which allows AutoClick users and single-switch users to perform all the common clicking functions of a two-button mouse. Specific buttons on the Dragger toolbar are associated with the common clicking functions — Double Click, Left Drag, Right Click and Right Drag. Dragger has an AutoClick Rest (On/Off) button, which enables and disables AutoClick’s dwell feature. There are also other Dragger buttons for keyboard management features such as rearranging the Dragger toolbar, hiding the keyboard, and quickly moving the keyboard between the top and bottom of the screen. SofType’s keyboard can be dragged anywhere on the screen just like any other window, but with Dragger’s convenient Move Top/Bottom button, only one click is required to move the keyboard from any location to the closest top or bottom screen edge. If SofType is already on a screen edge it will move to the opposite edge with a single click of Dragger’s Top/Bottom button. 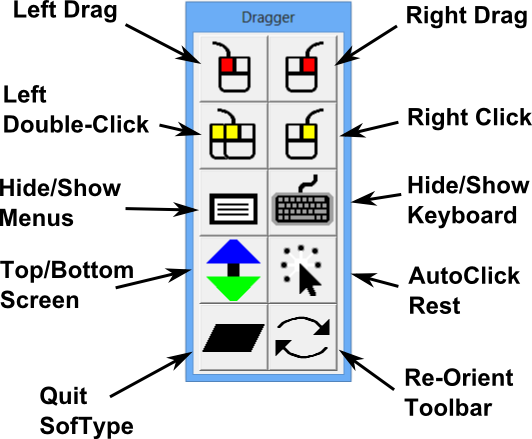 Word Prediction eliminates keystrokes when words are selected from the word list. As you begin to type, a list of words is displayed in the Word Bar, which match the spelling of the word you type. When your word appears in the list, simply select that word. This feature will automatically complete the word and add a space at the end. The word prediction window can be shown on any layout.

SofType offers a variety of keyboard layouts ranging from a very basic keyboard such as an alphabetic layout to a more comprehensive keyboard such as the Qwerty layout. It is also possible to create your own keyboard layout by using a text editor to edit an existing layout. All aspects of a keyboard layout can be modified. Parameters associated with keys including key size, font size, styles and colors are changed through menu selections, and by dragging the keyboard window edge. Background colors can also be modified using a simple dialog box. 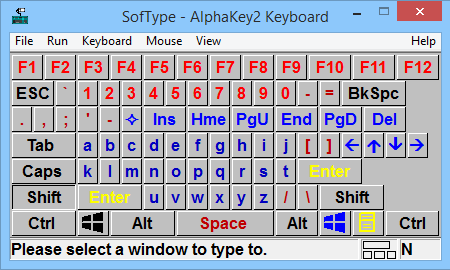 SofType displays keyboard layouts in languages supported by Windows. For example, when the French input method is selected, the French layout shown below is displayed. In addition to the layout, a separate word list is maintained for each language, and when changing the input method from one language to another the word list will automatically change as well.

Macro capability and abbreviation expansion make using SofType easier and more enjoyable by eliminating keystrokes when entering frequently used phrases, commands and other text entries. For example, using SofType’s macro capability, complete log on sequences to a web site can be entered with only two clicks.